The receiving of donations is new to me.  As we have worked to tell the story of the cause that has so drawn us in, we have found the most interesting patchwork of people connecting with our work to Prevent|Rescue|Restore|Reintegrate children from sex trafficking.  Family, friends, fellow Christ followers, strangers and age disparity is significant.  Every gift is very special.  Each one says to us that the donor gets the significance of this work which is an earthly example of the redeeming work of Jesus.  Each intervention becomes an opportunity to speak the one name of the one God that can really change a life. 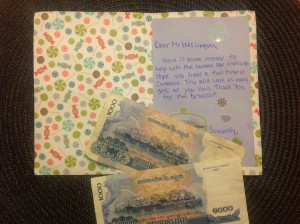 But there was one recent gift that just really was touching.  A young girl, about the age of those we will work with, offered a gift.  She sent it in a note.  But before writing the note she asked her dad about the paper bills she was offering.  She wanted to know how much they were worth.  When he answered she was convinced it was a large sum and was pleased she could give that much to the cause.  Her joy in having something significant to help was evident to her dad.  Her joy makes the gift enormous to us.

As we continue our commitment to speak about the abolition of child sex trafficking and the Power of the Gospel to bring real change, we thank all of those who have given gifts to our work.  Without each gift we would be sidelined.  Without your prayers we would feel alone. Without the Lord we would be weak.  With all these, we will see lives, families, communities and the nations changed.

Thank you.  Each and every one.  Every gift IS special.

As young boy, I set out to be a great athlete.  In my school, football was the big sport so I played football, but actually I was a much better runner.  And I loved to run.  I dreamed I would be the fastest ½ miler in the country and actually, I was one year when I won my first race of the season and it turned out to be the first official track meet of the year in the nation.  By the end of the first couple weeks I dropped off the leader board.  But I dreamed of that kind of success.  Being a missionary was not on my mind.

As a young adult, I set out to be the best sales representative my multi-national pharmaceutical company had ever had.  I planned to rise to heights in the company at a great rate and one day run the company.  I did quite well, rose pretty quickly but I never did run that company.  Being a missionary was not on my mind.

As young parent, I dreamed of an amazing family.  This dream has come true.  I am blessed with an amazing bride and amazing children and grandchildren.  This is a dream that has already come true.  Still, being a missionary was not on my mind but I was intrigued by those who were.

Later in my business career, I dreamed of moving an emerging company out of difficult circumstances and advancing it as a public company.  That dream ended a bit flat as after reaching the goal of “going public” the shareholders wanted something very different than what I expected.  I departed.  Short-term missions was inviting and now seemed a worthy work for which I had time.

I took what was to be a two year sabbatical from the business world to engage in the development of a new movement in churches, Family Ministries.  In 18 months I realized this was my niche.  Still, permanent mission work seemed unlikely although I did begin to have new dreams.

I found what I thought would be my role for the rest of my life when the universe of church ministry began to see business executives with  training and skills as useful in church work.  Being and Executive Pastor seemed to bring together years of experience in management with years of experience in ministry.  It seemed I had been prepared for this throughout my life.  Being a missionary now seemed unlikely. 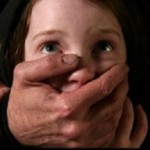 Then came a short-term trip to an Asian country known as an epicenter for some of the deepest and most vile sins of mankind – adults preying upon children for sex.  Selling them, trading them, trapping them, abusing them.  Suddenly, I wanted to be a missionary.  Someone had to go and I knew in an instant that the someone God was tapping was me.

I did not set out to be a missionary but now I find I am embarking on the greatest challenge of my life, to fulfill perhaps the greatest purpose of my life.  I have eight grandchildren and someone has to engage in changing the world they will grow in to.  Why not me?

Now I am setting out to be a missionary.  From where I see things today, I think God set me on this course long ago.  He just let me see it a little bit at a time.

Jeremiah 29:11 For I know the plans I have for you, declares the Lord……